How we did: High-level results

The day after an historic landslide electoral victory for the Liberal Party of Canada, we’ve compared our predictions (and those of other organizations who provide riding-level predictions) to the actual results in Toronto.

Before getting to the details, we thought it important to highlight that while the methodologies of the other organizations differ, they are all based on tracking sentiments as the campaign unfolds. So, most columns in the table below will differ slightly from the one in our previous post as such sentiments change day to day.

This is fundamentally different from our modelling approach, which utilizes voter and candidate characteristics, and therefore could be applied to predict the results of any campaign before it even begins. (The primary assumption here is that individual voters behave in a consistent way but vote differently from election to election as they are presented with different inputs to their decision-making calculus.) We hope the value of this is obvious.

Now, on to the results! The final predictions of all organizations and the actual results were as follows: 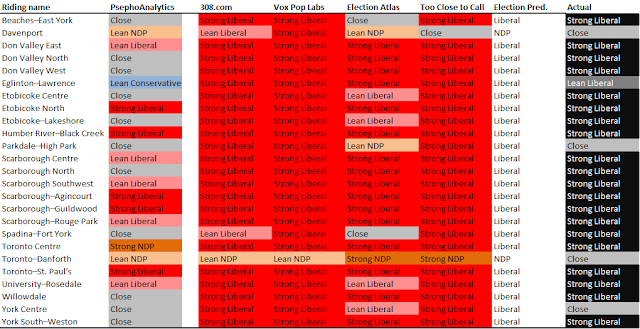 To start with, our predictions included many more close races than the others: while we predicted average margins of victory of about 10 points, the others were predicting averages well above that (ranging from around 25 to 30 points). The actual results fell in between at around 20 points.

Looking at specific races, we did better than the others at predicting close races in York Centre and Parkdale-High Park, where the majority predicted strong Liberal wins. Further, while everyone was wrong in Toronto-Danforth (which went Liberal by only around 1,000 votes), we predicted the smallest margin of victory for the NDP. On top of that, we were as good as the others in six ridings, meaning that we were at least as good as poll tracking in 9 out of 25 ridings (and would have been 79 days ago, before the campaign started, despite the polls changing up until the day before the election).

But that means we did worse in the others ridings, particularly Toronto Centre (where our model was way off), and a handful of races that the model said would be close but ended up being strong Liberal wins. While we need to undertake much more detailed analysis (once Elections Canada releases such details), the “surprise” in many of these cases was the extent to which voters, who might normally vote NDP, chose to vote Liberal this time around (likely a coalescence of “anti-Harper” sentiment).

Overall, we are pleased with how the model stood up, and know that we have more work to do to improve our accuracy. This will include more data and more variables that influence voters’ decisions. Thankfully, we now have a few years before the next election…

Posted by PsephoAnalytics at 20:48 No comments:


Well, it is now only days until the 42nd Canadian election, and we have come a long way since this long campaign started. Based on our analyses to date of voter and candidate characteristics, we can now provide riding-level predictions. As we keep saying, we have avoided the use of polls, so these present more of an experiment than anything else. Nonetheless, we’ve put them beside the predictions of five other organizations (as of the afternoon of 15 October 2015), specifically:

(We’ll note that the last doesn’t provide the likelihood of a win, so isn’t colour-coded below, but does provide additional information for our purposes here.)

You’ll see that we’re predicting more close races than all the others combined, and more “leaning” races. In fact, the average margin of victory from 308, Vox Pop, and Too Close to Call are 23%/26%/23% respectively, which sounds high. Nonetheless, the two truly notable differences we’re predicting are in Eglinton-Lawrence, where the consensus is that finance minister Joe Oliver will lose badly (we predict he might win) and Toronto Centre, where Bill Munro is predicted to easily beat Linda McQuaig (we predict the opposite).

Anyway, we’re excited to see how these predictions look come Monday, and we’ll come back after the election with an analysis of our performance.

Now, get out and vote!
Posted by PsephoAnalytics at 06:44 1 comment:

We’ve started looking into what might be a natural cycle between governing parties, which may account for some of our differences to the polls that we’ve seen. The terminology often heard is “time for a change” – and this sentiment, while very difficult to include in voter characteristics, is possible to model as a high level risk to governing parties.

To start, we reran our predictions with an incumbent-year interaction, to see if the incumbency bonus changed over time. Turns out it does – incumbency effect declines over time. But it is difficult to determine, from only a few years of data, whether we’re simply seeing a reversion to the mean. So we need more data – and likely at a higher level.

Let’s start with the proportion of votes received by each of today's three major parties (or their predecessors – whose names we’ll simply substitute with modern party names), with trend lines, in every federal election since Confederation: 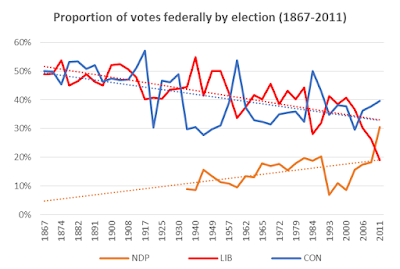 This chart shows that the Liberal & Conservative trend lines are essentially the same, and that the two parties effectively cycle as the governing party over this line.

Prior to a noticeable 3rd party (i.e., the NDP starting in the 1962 election and its predecessor Co-operative Commonwealth Federation starting in the 1935 election) the Liberals and Conservatives effectively flipped back and forth in terms of governing (6 times over 68 years), averaging around 48% of the vote each. Since then, the flip has continued (10 more times over the following 80 years), and the median proportion of votes for Liberals, Conservatives, and NDP has been 41%/35%/16% respectively.

Further, since 1962, the Liberals have been very slowly losing support (about 0.25 points per election), while the other two parties have been very slowly gaining it (about 0.05 points per election), though there has been considerable variation across each election, making this slightly harder to use in predictions. (We’ll look into including this in our risk modeling).

Next, we looked at some stats about governing:


All of these stats would suggest that Harper is due for a loss: he has been the sole PM for his party for 9.7 years, which is over twice his party's average length for a PM-ship. He's also second all-time behind Macdonald in a consecutive Conservative PM role (having past Mulroney and Borden last year). From a risk-model perspective, Harper is likely about to become hit hard by the “time for a change” narrative.

In any election where the governing party lost (averaging once every 9 years; though 7 years for Conservatives, and 11 years for Liberals), that party saw a median drop of 6.1 points from the preceding election (average of 8.1 points). Since 1962 (first election with the NDP), that loss has been 5.5 points. But do any of those votes go to the NDP? Turns out, not really: those 5.5 points appear to (at least on average) switch back to the new governing party.

Given the risk to the current governing party, we would forecast a 5.5%-6.1% shift from the Conservatives to the Liberals, on top of all our other estimates (which would not overlap with any of this analysis), assuming that Toronto would feel the same about change as the rest of the country has historically.

That would mean our comparisons to recent Toronto-specific polls would look like this: 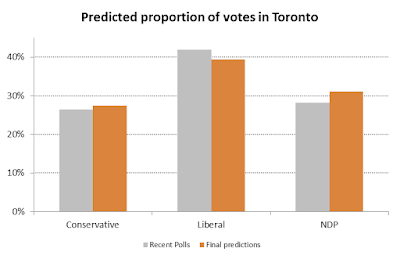 Remember – our analysis has avoided the use of polls, so these results (assuming the polls are right) are quite impressive.

Next up (and last before the election on Monday) will be our riding-level predictions.
Posted by PsephoAnalytics at 08:48 No comments:


Political psychologists have long held that over-simplified “rational” models of voters do not help accurately predict their actual behavior. What most behavioural researchers have found is the decision-making (e.g., voting) often boils down to emotional, unconscious factors. So, in attempting to build up our voting agents, we will need to at least:


Given that we are unable to peek into voters’ minds (and remember: we are trying to avoid using polls[1]), we need data for (or proxies for) factors that might influence someone’s vote. So, we gathered (or created) and joined detailed data for the 2006, 2008, and 2011 Canadian federal elections (as well as the 2015 election, which will be used for predictions).

In a new paper, we discuss what influence multiple factors, such as “leader likeability”, incumbency, “star” status, demographics and policy platforms, may have on voting outcomes, and use these results to predict the upcoming federal election in Toronto ridings.

At a high-level, we find that:
With our empirical results, we can turn to predicting the 2015 federal election in Toronto ridings.
It turns out that our Toronto-wide results are fairly in line with recent Toronto-specific polling results (weighted by age and sample size) – though we’ll see how right we all are come election day – which means that there may some inherent truth in the coefficients we have found.

Given that we haven’t used polls or included localized details or party platforms, these results are surprisingly good. The seeming shift from Liberal to Conservative is something that we’ll need to look into further. It is likely highlighting an issue with our data: namely, that we only have three years of detailed federal elections data, and these elections have seen some of the best showings for the Conservatives (and their predecessors) in Ontario since the end of the second world war (the exceptions being in the late 1950s with Diefenbaker, 1979 with Joe Clark, and 1984 with Brian Mulroney), with some of the worst for the Liberals over the same time frame. That is, we are not picking up a (cyclical) reversion to the mean in our variables, but might investigate the cycle itself.

Nonetheless, given we set out to understand (both theoretically and empirically) how to predict an election while significantly limiting the use of polls, and it appears that we are at least on the right track.
[1] This is true for a number of reasons: first, we want to be able to simulate elections, and therefore would not always have access to polls; second, we are trying to do something fundamentally different by observing behaviour instead of asking people questions, which often leads to lying (e.g., social desirability biases: see the “Bradley effect”); third, while polls in aggregate are generally good at predicting outcomes, individual polls are highly volatile.
Posted by PsephoAnalytics at 21:38 No comments: