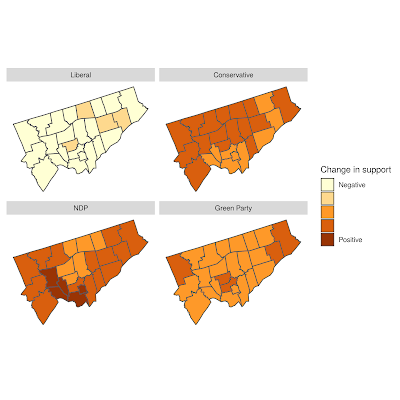 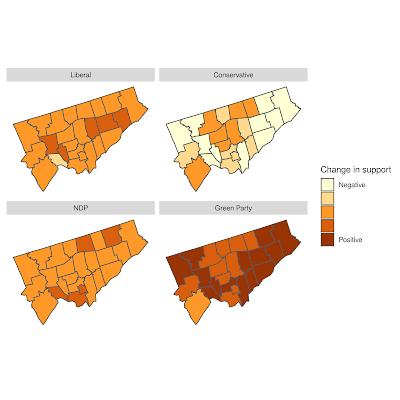 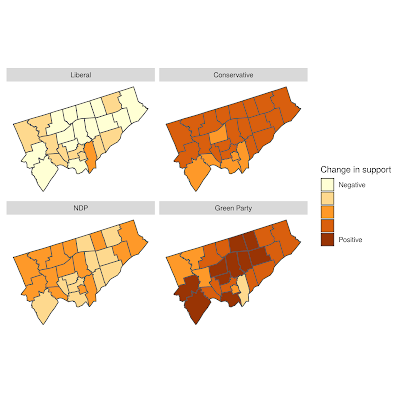 
Posted by Matt DesRosiers at 17:31 No comments:

In our last post, our analysis assumed that voters had a very good sense of the winning probabilities for each candidate in their ridings. This was probably an unfair assumption to make - voters have a sense of which two parties might be fighting for the seat, but unlikely that they know the z-scores based on good sample size polls.

So, we've loosened that statistical knowledge a fair amount, whereby voters only have some sense of who is really in the running in their ridings. While that doesn't change the importance of "likeability" (still averaging around 50% of each vote), it does change which parties' votes are driven by "likeability" more than their policies.

Now, it is in fact the Liberals who fall to last in "likeability" - and by a fairly large margin - coming last or second last in every riding. This suggests that a lot of people are willing to hold their nose and vote for the Libs.

On average, the other three parties have roughly equal "likeability", but this is more concentrated for some parties than for others. For example, the Greens appear to be either very well "liked" or not "liked" at all. They are the most "liked" in 13/25 ridings and least "liked" in 9/25 ridings - and have some fairly extreme values for "likeability". This would suggest that some Green supporters are driven entirely by policy while others are driven by something else.

As mentioned in the last post, we'll be posting some scenarios soon.
Posted by Matt DesRosiers at 11:28 No comments: 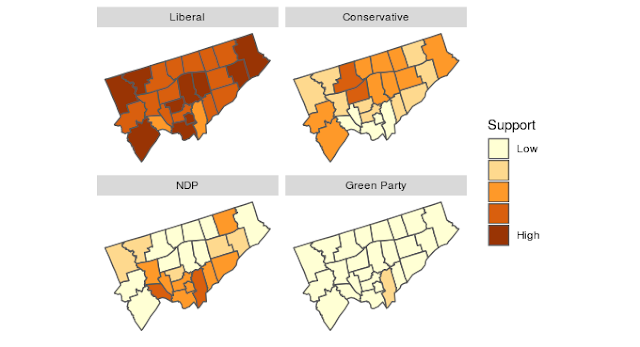